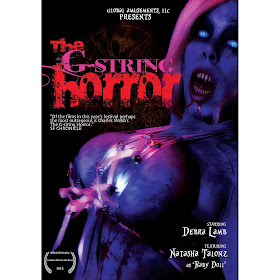 Apprehensive Films are quickly becoming the go to company for independent horror films at a great price, and G-String Horror is no exception.

Its defiantly got a catchy title. And surprisingly for a low budget film it also has some good acting, and nice effective gore effects.  Its about a film crew shooting a horror film in a supposedly haunted film palace, that was renovated into a strip club.  Turns out it really is haunted, and the ghost, or demons, or whatever you call them are not happy, and take over the film.

As a rule I am not a huge fan of "Found Footage" style films, however this is slightly different, and by different I mean in a weird European way. Like a dream within a dream. Example, there is a demon chick in this film called Baby Doll.  They call her this because she leave mutilated baby dolls wherever she goes.  Why does she do this you ask.  I have no clue, and truthfully I don't care.

This is a fun ride for fans of horror, and independent films.  And like I said its from Apprehensive Films, who don't rape people for cash like some companies do.  You can pick this up for the low price of $12.95  Check it out!